2012: Looking towards the end of the world

Something about 2012. Is it just me or are things so much more ominous this year? As I sit in Bodega Calle with a bottle of Ca de Calle nearby, I contemplate on the few short days since my arrival this harvest season. A couple weeks before my arrival, one winery employee leaves after 10 years with us, dissatisfied that he is no longer the only “key” employee in the company, that he in short has to respect reporting requirements on inventory movements, while at the same time he leaves under vague staff accusations that he may have stolen a pallet of Torrontés from a shipment made to a nearby cold storage facility. Unprovable of course, primarily because he did not prepare the correct documents required for the inventory transfer of this fateful shipment. Ironic. If “angel’s share” is wine lost to evaporation, what do you call this?

This morning I had a conversation with a long time Mendoza “bodeguero”. During the last 14 years they allowed their winery to build in the size of its administrative and winemaking staff as they pushed into new markets and strove to improve their wines with each harvest. We as faithful importers represent and inform on all sides of the market. We represent our buyer’s desire to have good quality wine for a good price while at the same time we try to make sure the wineries we represent get rewarded with adequate pricing for the quality products they produce. It is a hard balance at times. Today, I was told that in addition to laying off all the permanent staff outside the immediate family, they will need to raise their pricing 20% in order to survive the rampant Argentine inflation, (137% since 2007).

If 2011 marked the apex of the boom, then surely 2012 marks the pull back. As accurately forecast in the documentary Boom Varietal, (facebook.com/BoomVarietal), Argentina’s problem is not Yellow Tail, it was not the film Sideways. It is Argentina’s government. As I recall, the first push into the US wine market by Argentina in the 80′s was subdued not by an American disinterest in the country’s products, rather it was the Argentine government itself that messed up the economy so badly that wineries couldn’t afford to export their products. President Menem pushed the reset button in the late 90′s, but by then Argentina’s wineries had to start from the beginning all over again. I must ask, will we be doomed to repeat this history?

It is fitting that I sit towards the “end of the world” contemplating “the end of the world” of Argentina. It may of course not be the End Of The World, but certainly things are changing very quickly. My friend, the imperiled winery owner, said that he heard that the Presidenta doesn’t want to allow the peso to devalue “because it would strengthen her political opponents on the right.” It reminded me of our Republican congress for a second when they say as long as Obama fails, we win. Hey, anybody in politics these days care about their own country?

A rough straw poll seems to indicate that maybe close to 30% or more of the small wineries in Argentina may skip this year’s harvest or worse yet, forever close their doors. A growing number of wineries are for sale. Tough position and tricky to know what to do when 2012 seems to be setting up to be clearly a better harvest than 2011. A hot year again, no surprise there. Particularly in the famed Luján region and extending east from the mountains. The winner this year will be Valle de Uco. Higher altitude, with cooler nights and a longer growing season, the preference is becoming increasingly clear.

The fact that our winery is located in Luján gives us pause. The most important DOC wine region in Argentina is Luján de Cuyo. We had great illusions about qualifying for Luján DOC Malbec status, but now with the hot weather, I am uncertain. Better fruit is to be had farther south…

Today’s marks a tough day in the business of producing wine in Bodega Calle. We were ready to fill 90,000 bottles of 2011 Malbec, Cab/Sauv and Merlot. The quality of the glass bottles were so bad we had to stop the bottling and send everyone home. Our Argentine supplier, Cristalería Rosario, sent us bottles worse than I have ever seen in my life. 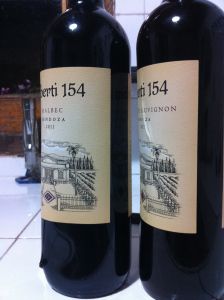 Of particular interest is the nipple on the bottle in the lower left. Is that where you are supposed to open it?
Industria Argentina can’t be the ongoing joke for all eternity. Please folks, let’s not fall apart so easily.

We can do better! Until next time. Chau.